Neosporosis is a relatively rare disease in greyhounds, but when it does occur it can be fatal.  There is very little known about it outside the racing industry but it is thought Neospora infects a greyhound when poor quality food from diseased cattle is eaten.  It is not greyhound specific, any dog can suffer from it.

If you research online the industry will say it does not exist in greyhounds.  Mainly because they say they do not often feed their greyhounds beef.  But it does exist and it is becoming increasingly common.

Neospora is a single celled parasite of livestock and companion animals. Neosporosis is the disease that affects dogs. In a plain English, the parasite eats away at the cerebellum and that takes away your dogs ability to balance himself until it is either cured or your dog sadly dies.  This video shows Miller in 2016 – where he takes 2 steps forward and 3 back, similar to someone who has enjoyed too much time in the pub!

In February 2019 Miller had a MRI scan on his Cerebellum and part has gone, the parasites had a picnic inside his head.  Aside from the jokes about greyhounds and their brains – he has been left none the worse.  He is goofy – if his gets excited his head wobbles and he has joined the ministry of funny walks.

To explain, this video was taken in September 2020 at Coombe Abbey in Coventry.  The tree lined entrance to the Hotel is squirrel world and Miller really loves a squirrel.  If his head wobbles, we know he is happy.

What are the symptoms?

Lack of balance is the main symptom we have experienced – in a similar way to being drunk.  Because greyhounds can be very stoic, it can be difficult for any Vet to work out what is wrong.  Please refer 1st video above to see how it affected Millar.

“Two weeks ago he started to dramatically lose weight, without losing his appetite. He’s since been wormed. He also developed serious pressure sores on his outer thighs in just days even though he has soft bedding. He was put on antibiotics and a mild steroid for this. The vet said it was likely a hyper sensitive reaction to stress which he thought had led to the weight loss too.  Over the weekend he became unsteady on his feet and then today this. Miller has been seen by the vet again in Ennis and they are treating him for a blood infection but say it’s an unusual case and he could have an autoimmune issue or even a brain tumour. He is on a higher dose of antibiotic. The greyhound is in good spirits himself, doesn’t appear to be in any discomfort or pain and still has a good appetite.”

The first video was sent to a person connected with the greyhound industry who strongly suspected it was Neosporosis, from his past experience.  Miller was given antibotitics and was fine until January 2019.  In the meantime he was rehomed by Kent Greyhound Rescue.

In January 2019 his symptoms started again – just the odd stumble but by early February he was very unsteady and by mid February he was practically unable to walk at all. We had yoga mats everywhere and he was just unable to balance enough to climb on the sofa (his favorite place).  He went downhill very quickly and was admitted to a referral vets for specialist treatment.

Orthopaedic abnormalities were explored whilst we were waiting for the blood test to come back for Neosporosis – this took nearly 3 weeks.  In the meantime the vets could not decide what was wrong with him but thankfully the Irish rescue found the original video – it was sent to the referral vets and his treatment plan was quickly changed.  If we had waited for the blood results he would not have made it. Once Miller started to take his antibiotics he recovered quite quickly.  And 2 months later was pretty much back to normal.

He was prescribed  2 types of anti-biotics for several months  Co Trimoxazol and Clindayain.  He still takes Co Trimoxazol.

His quality of life is now back to normal and he is a very happy boy.

If you have any of the symptoms please contact your Vet.  Please show your Vet the videos if you need to.

Sam arrived with us as a young pup who was resuscitated at birth hence he was never expected to race.  We overcame all of his problems and then at 12 months old his Neosporosis took hold.  It was diagnosed late and because of his other medical problems he sadly didn’t make it.  We didn’t fully appreciate what it was at the time (2017) but looking back we know of a number of dogs who have had Neosporosis.  RIP Sam ♥ 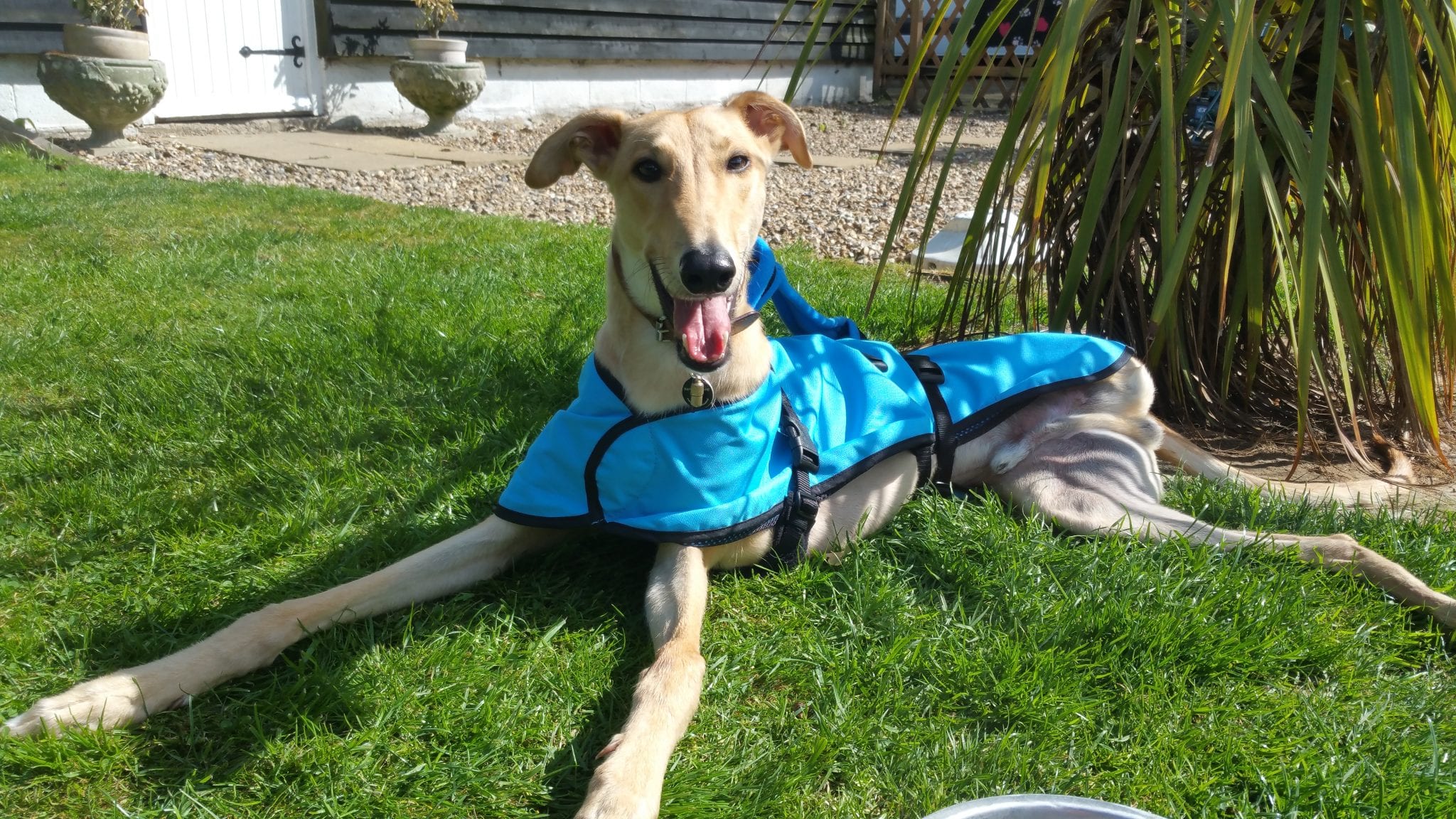 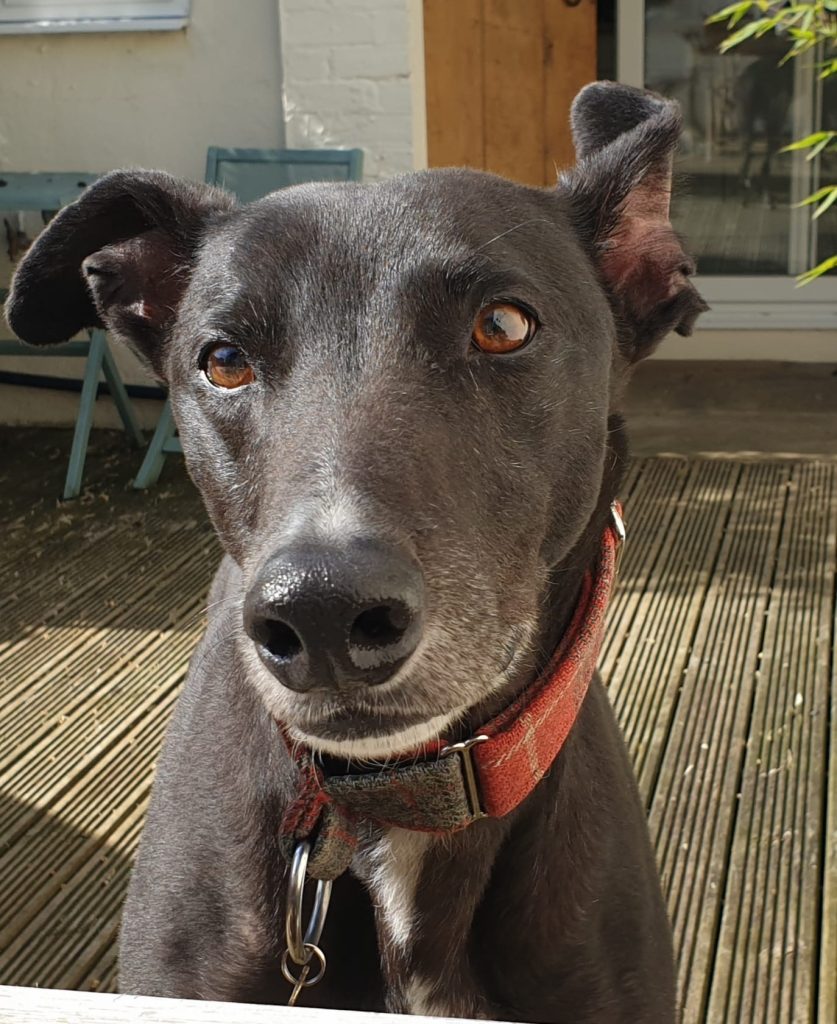